Nudging in the ‘Freie Hansestadt Bremen’!

What does nudging mean in a nutshell?
Nudging is used to give people who want to dispose of their waste a friendly nudge in the right direction. This can be done in a variety of ways. One example is placing an eye-catching sticker on the waste bin. This encourages people to throw their trash in the smart trash can more often because it attracts attention. Not only are people encouraged to throw away their waste more often, but also the smart waste bins stand out in the streetscape in a positive way!

Bremen
The smart waste bins are placed in the busiest places in Bremen. The city of Bremen has 120L, but also 240L Ultra-Fill models. The municipality is working to apply nudging in more and more places. In this way, there will be more and more incentives for users to throw the waste into the smart waste bins so that there is less and less litter to be seen in the ‘Freie Hansestadt Bremen’. 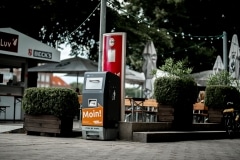